There is no denying that the Australian Open Grand Slam is one of the biggest sporting tournaments in the world. With only four Grand Slams played a year, winning the open is the dream of any professional tennis player.

For fans, the Australian Open is an incredible experience. During the two week tournament around 3/4 of a million people descend on Melbourne Park transforming it into a sports-focused festival.

For Tennis Australia, the organisers of the Australian Open, there is always a keen interest in getting the fan as close to the action as possible. The advancements in 360 video allowed this focus become reality.. dare I say.. virtual reality.. ;)

Imagine yourself standing in the middle of a room with every inch of wall, roof and floor covered in TV screens. These screen present a scene, say a beautiful landscape, in all 360 degrees of view. As you turn and look left, right, up and down you see a different perspectives of this view. 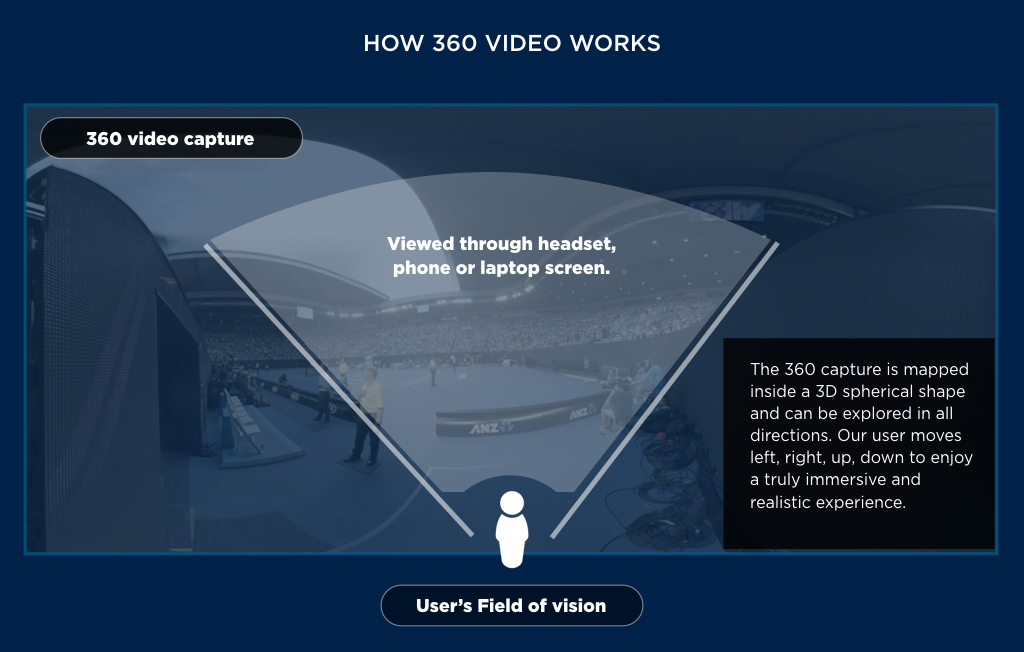 360 video works in this same regard. The content is mapped inside a sphere to be explored in all directions. The user simply picks up their mobile phone and moves it to the direction they want to view. Move the phone left and they’ll see that field of view, move up and they’ll see what’s above and so on.

What opportunity does 360 video present

Kevin Spacey says it best. During January’s World Economic Forum’s Annual Meeting he summarised virtual reality as the opportunity to:

In terms of opportunity he outlines that VR offers the ability:

“To be able to allow someone to actually go somewhere and be somewhere that they may never have a chance to visit, and see what someone’s circumstances are that are completely different to their own.”

His entire perspective on VR is fantastic (available YouTube) including opportunities for theatre and how it could revolutionise education. It’s highly recommended viewing!

Hat tip to Zach Kahn for the video

Capturing 360 video requires a special camera, or collection of cameras to ensure all fields of view are recorded simultaneously. Some great entry level options are the Ricoh Theta S and the soon to be released Samsung Gear 360. Both these cameras capture an entire 360 scene which can be simply downloaded from the device.

Once you look to increase the quality of the image the level of complexity is too increased. A popular hi-definition setup combines a collection of GoPros (anywhere from 6 to 16) uniquely arranged to ensure all fields of view are captured. The footage from each camera needs to be stitched together with specialised software to create the entire 360 scene.

Like traditional video, 360 video can be either recorded or live. Presently, recorded content is the more popular format with both YouTube and Facebook supporting 360 video. Thankfully 360 video can be edited in industry standard video editing software such as Adobe Premiere

Live 360 broadcast requires a partner, some specialist hardware and software to help with delivery (more on that in a tick). Internet is required so wherever you can get decent connection (even LTE/4G mobile is fine) you can broadcast your event live in 360 degrees of view!

How can 360 video be delivered

There are a number of ways that 360 can be delivered. The most popular, as mentioned above, is via social media. Facebook and YouTube both support 360 video format. Uploading your 360 content to both networks gives your video the potential to reach millions of users. At present time both YouTube and Facebook only support recorded 360 video although I don’t imagine it long until live 360 is available.

Another delivery option is via a custom built mobile app. The best example is that delivered by the New York Times with nytvr app. Custom apps help add to the storytelling experience. Some examples include allowing user’s to switch camera angles, content unlocked based on user location or a heightened level of engagement allowing users to interact with elements in the content.

Rounding out the options is bridging the divide between the digital and physical worlds. Succinctly that’s showcasing 360 content via an installation. A purpose built installation can take the experience to another level in a number of ways. Support staff onsite can guide the user helping connect with an audience that wouldn’t normally gravitate towards something high tech. Multiple pieces of content can be made available at different stations allowing more content to be viewed in shorter amounts of time. This approach can help brands such as sports teams to offer passionate fans an added game day experience.

A case study of 360 at the Australian Open

In delivering a 360 video experience for the Australian Open we opted for a live broadcast of centre court. The camera was positioned on the baseline giving a great view of the entire court. To offer the best experience and to effectively ‘transport’ viewers to the court we configured a 6 camera GoPro rig to capture the scene in a whopping 4K resolution.

Utilising the services from our friends at StreamShark we live streamed the footage straight into a space located onsite. Fans could walk into the space and place a headset onto their face to then drop into centre court. The headsets were custom built (3D printed in fact) and dropped from the ceiling. This created a clean environment with no cables getting in the way and also enabled a high turnover of users during busy periods.

Enough words - check out the little video we put together. It was such a great project being able to bring so many fans onto centre court!

Tips on improving your 360 video experience

With our experiences with the Australian Open and other clients we’ve learnt a great deal in delivering 360 video. Below are a few tips to ensure your 360 project is the best if can be!

I hope this intro into 360 has been valuable. Of course if you’re interested in finding out how your brand could utilise 360 video please get in touch.