Are stadiums ready for the transportation revolution?

Delays or general issues encountered during a fan's commute to and from an event significantly factor to its success. For stadiums and event organisers creating positive customer experiences starts many hours and a significant distance from the event itself. While seemingly transit issues are out of the stadium's control, some measures can help influence fan's travel choice and in turn potentially improve the travel experience for all.

As a whole, stadiums accommodate traditional methods of transportation, but anything outside that is generally poorly serviced. With inaction, stadiums will be blind-sighted to the rapid rise of the new wave of easy to use, non-car transit options.

As the sharing economy has evolved, and technology advanced it's becoming more than just cars, taxis, trains and buses:

In its relatively short lifetime, this mode of transport has gained immense traction in the cities in which it operates. Case in point as reported today the electric scooter company Bird is rumoured to have sourced $200 million in new funding to help its ongoing expansion. In 9 short months, in its home of Santa Monica, Bird has amassed 630K trips with travellers commuting 1 million miles.

Added to this Bird makes good money per scooter with each drawing $15 a day. Within 50 days a scooter is profitable. More competitors will enter this space, increasing supply and demand from customers.

In 50 days you have a cash machine. FIFTY. You tell me another investment that pays for itself in 50 days. And that’s assuming no growth. cc @soopa https://t.co/WeHrUMsJ03

It's therefore logical that soon (if not already) fans will be commuting to venues via this method en masse. The change in customer behaviour will bring challenges for stadiums to accommodate them at the venue.

Roads, and in some cities, public transit can't cope with a simultaneous migration of large amounts of people

It's no surprise that massively stretched road and public transit infrastructure heaves when 20K to 40K to potentially 100K collective fans ascend on a single location at a coordinated time.

In May, many U2 fans missed the concert entirely due to traffic and parking issues.

While ridesharing, including the future arrival of autonomous cars, release pressure on stadium parking, they still add to the congestion on our roads.

Nothing is more powerful than seeing Dodgers stadium from above. The 16,000 spaces occupy a vast amount of real estate. One has to ask, is this the best use of prime stadium land 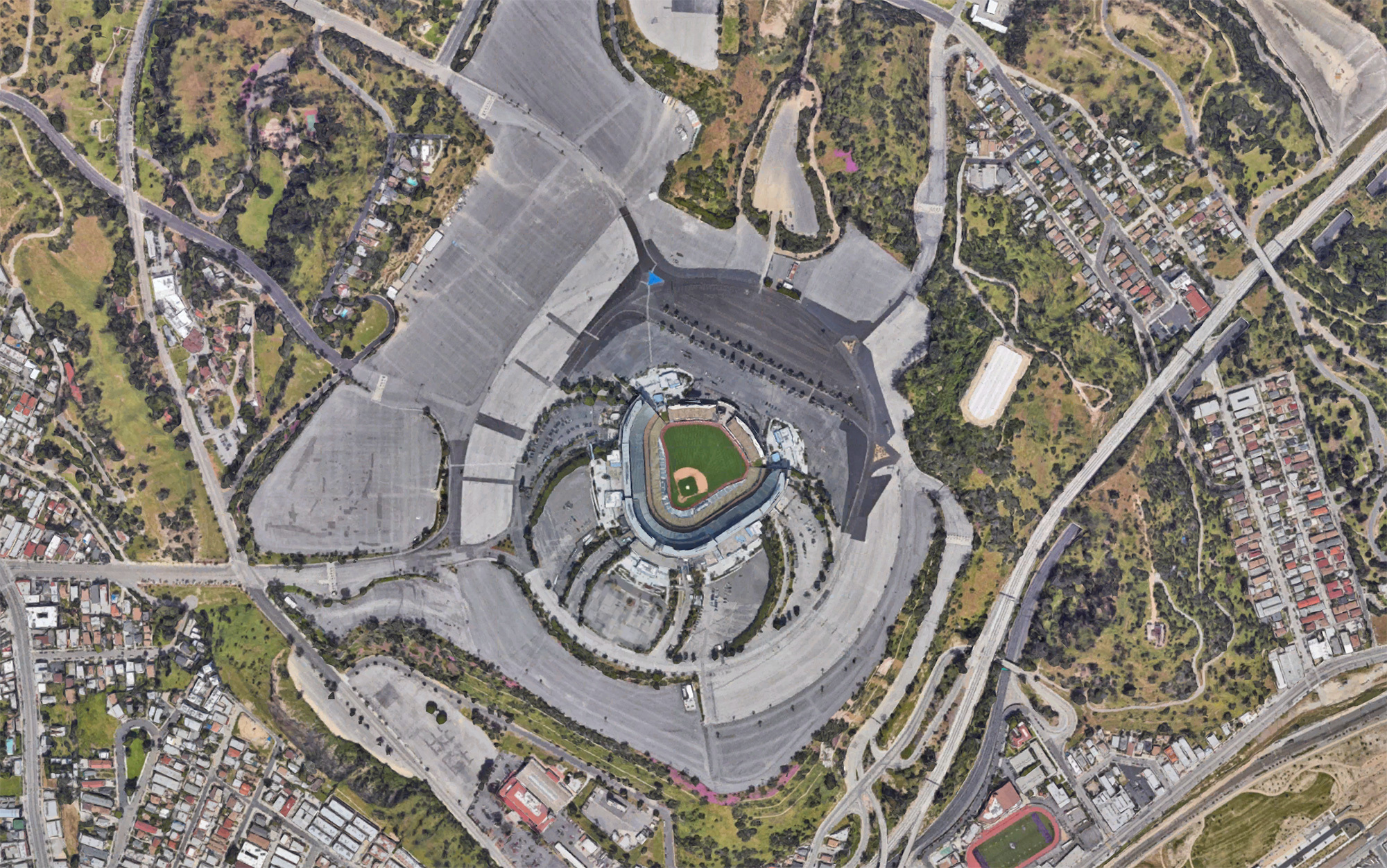 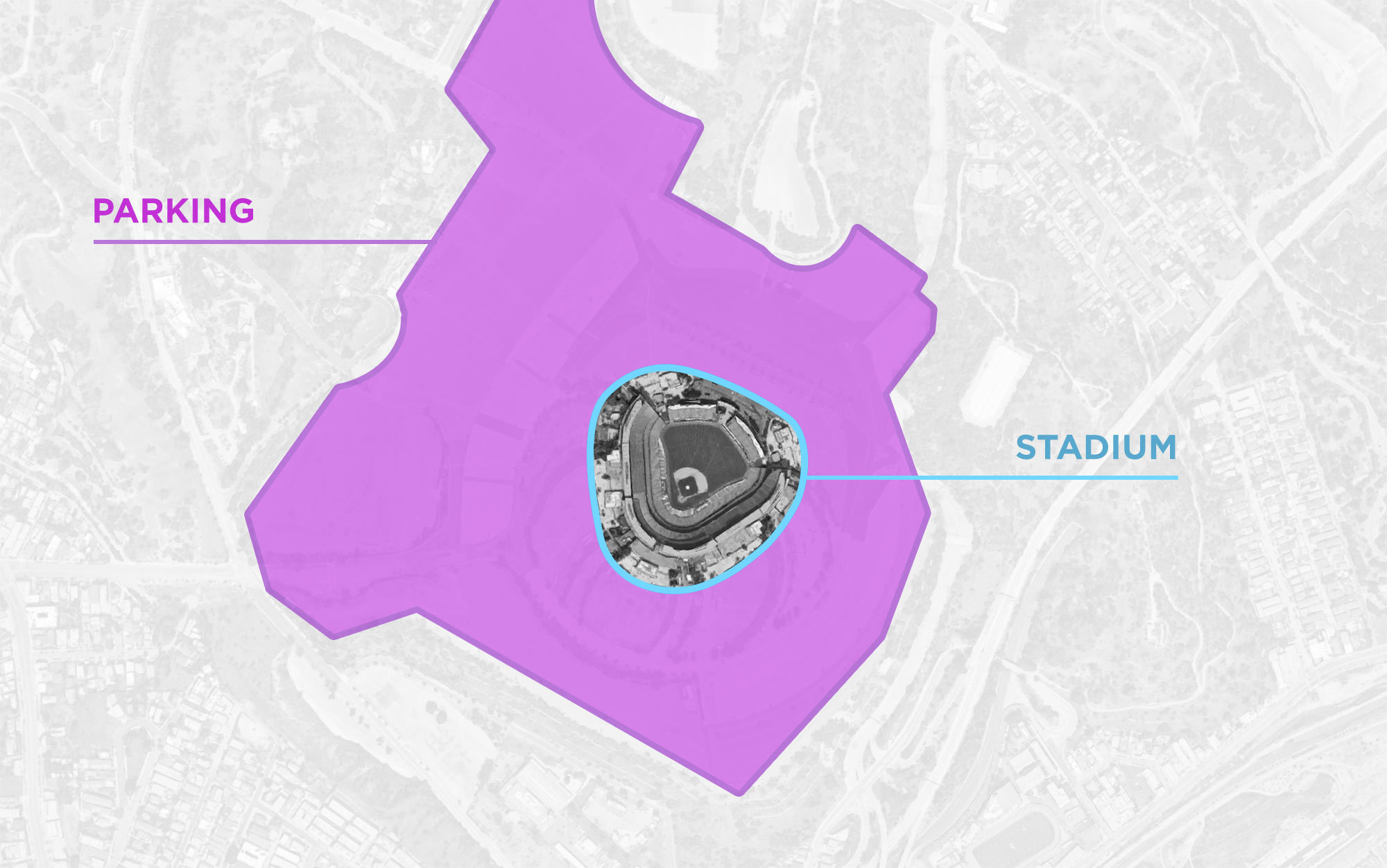 Helping more people lessen their need for their car helps those that need to dive. Giving people who use public transit alternate options, provides more opportunities to those that rely solely upon transit.

A recent study showed that 50% of peak hour taxis rides in NYC would be faster as bike rides. Bringing these people out of the gridlock and into bike lanes helps better distribute the commuting load.

Today, the distribution of commuters exists with very short trips attainable on foot with longer trips in a car (both shared and self-driven) or via mass transit. The mid-range trip is an area that personal vehicles can (and do) own. Cycling is the obvious method, but for many, given the physical exertion required to cover a reasonable distance, it's not an acceptable choice.

This is the market where electric scooters and bikes will thrive.

By their own stats, shared personal transport companies satisfy travel in this realm with on average rides lasting for 1.5 miles/2.4km (scooters) to 2.6 miles/4.0km (bikes).

Yoooo i saw kid take a bird to LAX lmao

Distributing fans across multiple transportation methods helps to create a better customer experience for all fans. Fewer cars ease congestion on roads and parking lots. Reduced transit passengers ease load on gates as sudden waves of fans aren't arriving at once. Added to this the vehicles themselves are small and environmentally friendly.

Let's empower fans, providing them with multiple transportation options and let them choose the best that satisfies their situation.

While the technology is new, systems and processes need to put into planning to help support fans when broad adoption arrives. As we've seen in the past, a revolution will be on our doorstep before we even know it.