Can a stadium galvanise a city?

Atlanta United, with 2017 its inaugural MLS season, should command ultimate respect in the sporting world. On the field, they're on the cusp of great success (EDIT: success achieved). In only their second season they've clinched the Eastern Conference and are into the MLS Cup Final to battle the Portland Timbers (EDIT: which they won). Off the field, their success is unrivalled. In these two short years; the city, the team and of course the fans have come together to create a franchise filled with immense passion.

There is no denying the stadium has largely influenced this success. The team’s performance and fan development strategies have certainly played a significant role over these formative years. But giving fans a venue to be proud, a venue that creates great experiences, a venue that's full service and easy to access has cultivated a fan base that wants to turn up rain, hail or shine to show support for the team and not simply camp out on the couch at home. For Atlanta United, Mercedes Benz Stadium is the launching pad of their fan engagement activities.

A fantastic testament to this is witnessing the home crowd during the first leg of the Eastern Conference Playoffs...

In July we had the privilege of experiencing first hand the city's enthusiasm and exuberance for the team. Walking through the streets of Atlanta there's there’s an incredible feeling that Atlanta United is the city's team. A team that unites, bringing together people from all walks of life, some new, some old but all share the common trait of calling Atlanta home. ​​There are of course the Falcons, the Braves and the Hawks, traditional Atlanta franchises each with an undeniably significant history and following. Yet the new kid on the block; Atlanta United, has managed to truly harness the city’s pride and passion. 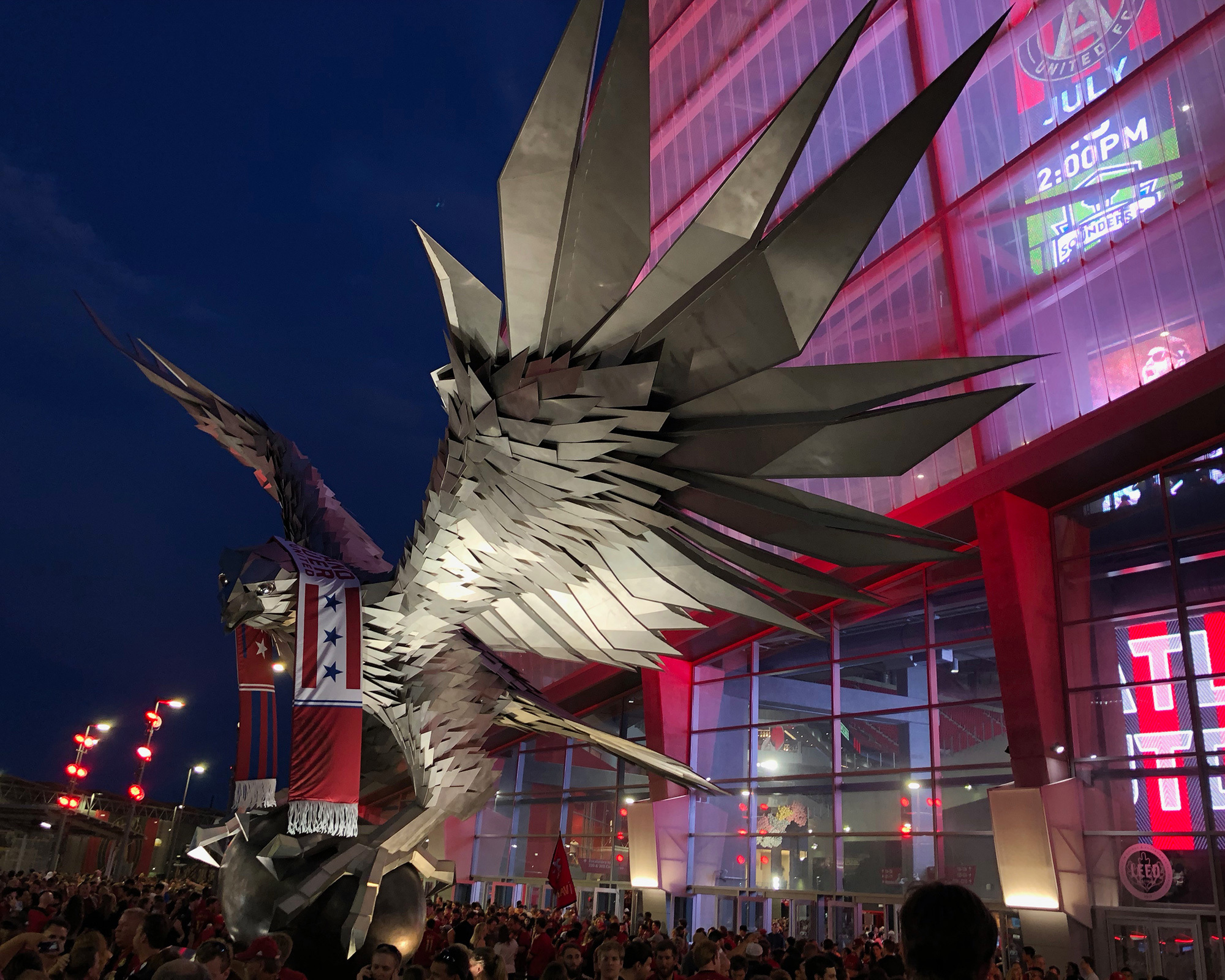 The first sense that something was different about this city and the team was weeks out from our arrival. Our AirBnB host checked if we were in town for the match and offered up transport suggestions as well as arranging clear bags for us to take to the stadium (a standard security requirement these days). We thought nothing of it at the time other than a friendly host, but in retrospect, it's clear that the fabric of ATLUTD is entwined among the city's people!

After arrival and roaming our local area it was hard not to miss the ATLUTD flags that adorned the gardens of almost every home in the neighbourhood. On the day of the game, our Uber driver greets us with the club's chant (we were decked in the team's merch of course) and then rushes us to the ground so he could park and then attend himself.

Generations of allegiance and traditional codes

Atlanta is a transient city; it's known as a city of transplants as the majority of its mature age population not initially from the state.

American Football, Basketball, Baseball histories and associated allegiances run deep. This huge percentage of the population class the Braves, Falcons and Hawks their second team (at best). No denying there's considerable support for these teams across Atlanta, but no one team can proclaim to capture the following of the entire city.

That's where the rise of MLS has been perfect for franchises in cities such as Atlanta. Given its short history in North America, few fans have existing teams and the MLS is capitalising.

The ambitious expansion plan is considered and sympathetic to the geographical and cultural changes happening in the United States. Finding both a transient and immigrated population (especially sourced by cultures with a love of soccer) the MLS and its teams hold some very powerful cards.

The Drum went deep on the MLS strategy in its vision to become the sport of North America. It's modern, digital and fan focus further supports its growth both as a league and as new teams enter the fold.

While the foundation has been laid, passion and pride doesn't generate itself

Again, in reference to the experience had in Atlanta, the team isn't resting on laurels. Incorporating a similar strategy, albeit different approach to LAFC, ATLUTD is exceptionally fan-focused.

There is no better example than the stadium itself. Mercedes Benz Stadium is one of the most fan-friendly stadiums in the world. Concession prices (and the quality of food) is something rarely seen in the industry. Even with setting the benchmark for aggressive and fan-first pricing, MBS is cutting a further 12% off the top. While the decision ties back to fan experience, it's a financial windfall for the stadium.

Dropping food and beverage prices has proven popular and lucrative for AMB Group. Despite similar attendance rates and a 50 percent drop in food pricing, average spending per fan at Falcons games between 2016 and 2017 increased by approximately 16 percent due to volume increase of 53 percent at Mercedes-Benz Stadium. Gate and transaction data also indicate more than 6,000 Falcons fans per game entered the stadium earlier than in previous years to take advantage of the food/beverage options and pricing. 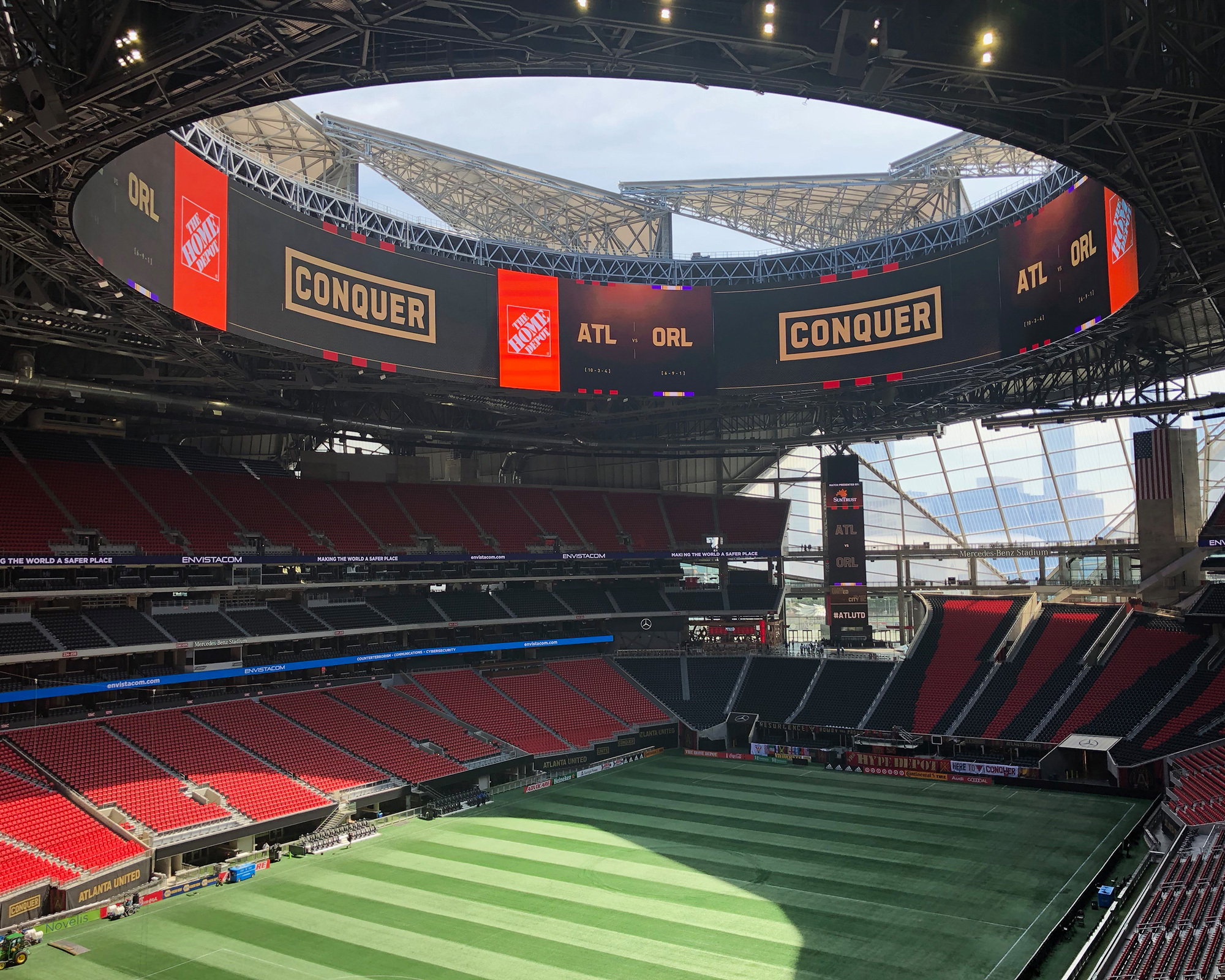 Outside of being ones of the most architecturally and technologically advanced stadiums on the planet, the stadium puts the fan first. Each seat boasts an unobstructed view of the pitch. The halo board is both uniquely designed ensuring all can view but, in my opinion, it's the position of it that is revolutionary. Located high above the action, out of the primary field of view, but still very much accessible, it's out of the way of the live play ensuring you don't find yourself watching the screen all match (which I've seen myself doing at many stadiums). Its design helps fans focus on the game and in turn create an authentic stadium experience.

The fan-first approach is helping Atlanta United set all sorts of attendance records:

We were privileged to witness the above-mentioned match and can attest that there the atmosphere was electric!

A powerful force in future proofing the league

MLS, during the early stages of its expansion plan, has shown adept knowledge in the cities, cultures and supporter bases of where new teams are to be located. The administration arms of these new franchises are employing measures to ensure the upswell of passion is organic and not manufactured (more detail via our LAFC case study). From these building blocks, teams are formulating a robust and passionate fan base that will stand side by side with the club for years to come.

Integral to the success of these new franchises is the destination for fans to come together to share a collective experience. Every club the world over understands that providing unique at-match experiences is the cornerstone of their club. It breeds fan passion and creates an environment for visiting teams to fear. Stadiums are the lynchpin in this endeavour and must give each fan the impetus to don the team's colours and show support rain, hail or shine. If the stadium creates friction for the fan either from accessibility, concession, viewing and doesn't facilitate the critical drivers for attendance, then fans will merely watch from home.

In Atlanta, locals have arguably the world's best stadium on their doorstep, and it's helping to create one formidable football franchise.