Snapchat is the best seat in the house

As like millions of others, I tuned in to watch Kobe's final NBA game last week, aka Mamba Day. Twenty years at the top of a professional sport is an incredible achievement and something I was keen not to miss.

My setup for the afternoon consisted of the broadcast full screen on my laptop (shoutout to NBA.com for the free stream), and the corresponding Snapchat Live Story rolling on my iPhone. What I was seeing on both screens was amazing. The broadcast gave me an experience only broadcast could. It was a high quality, heavily produced view of live action. During breaks highlights unearthed from the vault showcased Kobe’s incredible past performances. Snapchat too gave me something (that I now realise) only Snapchat can, a sense of being in the stadium, a sense of participating in Mamba Day.

Snapchat’s NBA Live Stories blend content from two major points of view; 1) from fans showing us life in the stands and 2) from the team with a behind the scenes view.

In the roughly four minute story the viewer is transported from the change rooms pre-game, to court-side during the anthem then to multiple angles during the game itself. When it’s all said and done we see the highs and lows of the victory or the loss. Each viewpoint gives its own perspective of the event. Live score overlays and custom graphics add to the experience but the real hero is the content. Whether fan generated or team captured the video is raw and bursting with passion, excitement and energy.

As with all Snapchat Stories, a Live Story disappears after 24 hours. This leaves me on one hand a feeling of disappointment that such great content evaporates so suddenly. But on the other hand it gives a heavy dose of FOMO, in turn bringing me back on a daily basis to my Stories screen.

But can it scale?

Live Stories are curated by human editors. Anyone capturing Snaps at the stadium has the opportunity to post their content to the story. Content is added to the pool and moderators back at Snapchat HQ add the best to the global viewable story. Given the level of involvement Live Stories certainly aren’t realtime, but aren’t too far behind the live action.

From a viewing perspective it’s as simple as a left swipe and a tap. There’s no noisy feed to scroll or a buried button to find. One can imagine this simplicity might get harder to retain if/when a larger number of Live Stories exist. 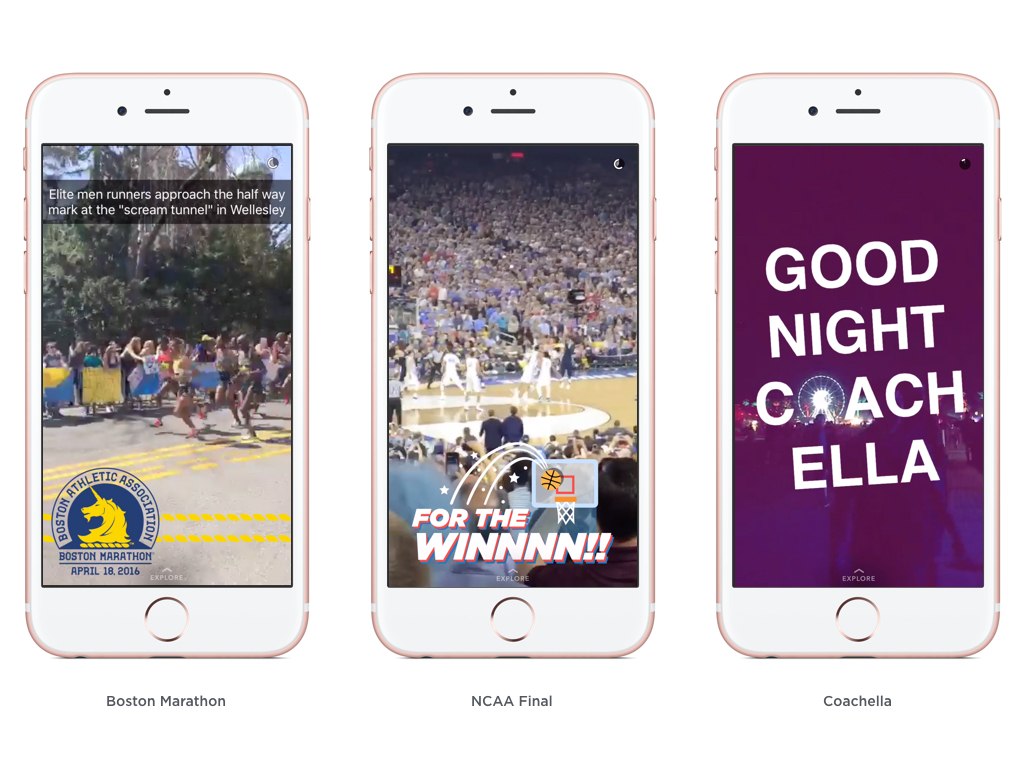 Snapchat has been rolling out this feature for major events like Cochella, NBA and the recent NCAA final. We’re also seeing some somewhat more random events like Beer Week and the Quidditch Cup. College campuses have their own College Stories too.

I’m intrigued to see how Snapchat will scale this feature. (UPDATE: This feature exists in the US. As an Australian user I was unaware as it's yet to be rolled out here) Will Snapchat be forced to employ and army of thousands of curators globally?

Twitter moments (Twitter’s feature aimed to uncover exceptional live content) has scaled to multiple regions for multiple verticals. Human editors are employed for each around the globe (for sport, politics, news etc.). Before ‘moments’ Twitter never had an issue of breaking news, it was simply about discovering it. With a simpler discovery mechanic could Snapchat break news through Live Stories? Could a Live Story announce epic events like a plane landing on the Hudson? A terrorist attack? Or a celeb/Royal wedding/birth?

More importantly.. does it need to?

Snapchat has uncovered the next iteration of user generated content. With fans behind the camera and Snapchat in the director’s chair the rest of us are reaping the rewards.

The only complaint is a Live Story isn’t exactly live. With Facebook and Twitter heavily invested in live video this, I imagine, is the next frontier. Will we see Periscope et al create event based streams allowing users to switch viewpoints on the fly?

Either way, at this present time for those looking to experience a different perspective from sports to music to culture the best seat in the house is undeniably on Snapchat.